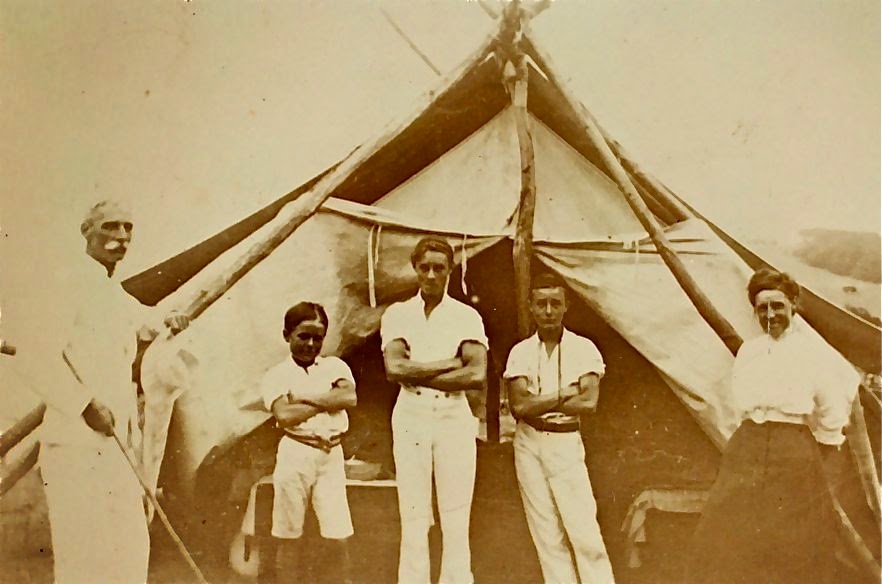 Frederick was the third child of seven born to William J. Rhoades and his wife Elizabeth in 1857 in Manchester, UK. Fred, aged 23, was a tall, slim lad who, despite his respiratory troubles, excelled in many sports including athletics, boxing, fencing, rifle shooting, hunting and swimming. He preferred individual sports and was not keen on cricket or rugby.

Of Anglo-Norse ancestry, he was very fair with almost white hair, large bushy eyebrows, very pale blue eyes and a decisive hawkish nose that continues to appear in further generations of the family to this day.

At school and university, Fred had acquired a reputation for being rather outspoken and having a certain antagonism for authority (sounds like at least half of the Rhoades' that I know!!). His early ambition was to become a priest of the Church of England, however, at the age of 23 his career had a change of direction.

Frederick had been studying Theology and Manchester University for almost 2 years when he came to the conclusion he was no longer a Christian; he simply could not accept the teachings of the church. He therefore decided to quit university and look for another career path. Fred had suffered a great deal as a child and a young adult from serious lung infections and his doctor advised he should leave the cold, damp climate of Northern England and head for Australia or perhaps the South Pacific Islands.

Fred finally decided on the sugar industry in Fiji. He arrived at Suva on Viti Levu in the Fijian Islands in late 1880 to start a new career as a plantation bookkeeper. Frederick held a number of administrative positions with companies operating in the South Pacific culminating in the position of island manager and director of Lever Bros. Australia based in Sydney.

Frederick was convinced that he was "top drawer" and, in line with this perceived genetic excellence, he met, fell in love with and married, in 1894, a young lady of noble lineage in County Cork, Ireland, while visiting Europe on business.

Josephine Isabella Victoria Rankin was a beautiful young lady and a member of the Gordon Clan, with family connections to the Marquis of Huntley and the Count of Lonsdale.

Frederick and Isabella (as she was known) returned to live in Sydney where they had 3 sons, Frederick Ashton (born 1895), Edison Rankin (born 1896) and Gordon Pegus (born 1901).

By the early 1900's, Frederick had become moderately wealthy and had purchased a substantial property in Chatswood, Sydney. His acquisitions included "Haddon" the family mansion, a large majestic house which still stands today, set in an acre of garden on the corner of Archer Street and Mowbray Road, and a row of properties on Archer Street.

Apparently Freddie and Josephine had a fourth child, a daughter who died around 5 days after birth from a heart problem, probably in about 1910 when this photo was taken. She was very likely buried in Crows Nest, Sydney.